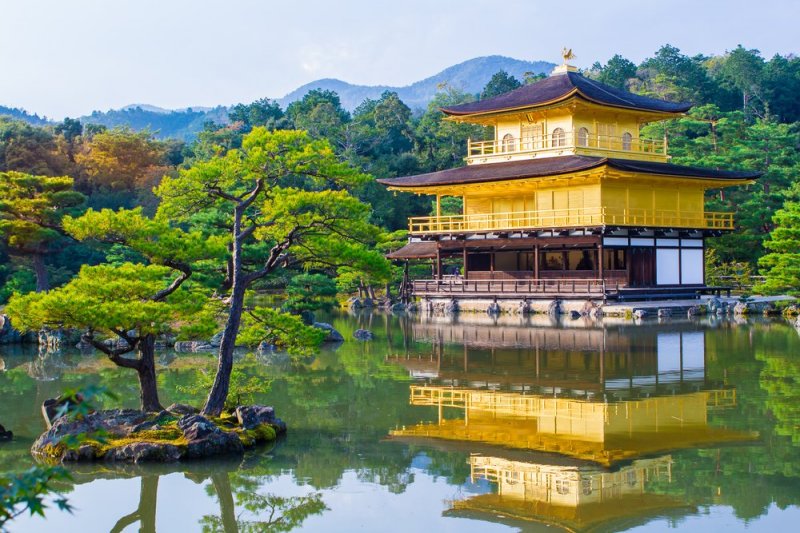 Well known as the Golden Pavilion, Kinkaku-ji is a three-story Zen Buddhist temple in northern Kyoto. Kinkaku-ji and Ginkaku-ji (Silver Pavilion) were built in the 13th century and were originally intended as noble villas for the Ashikaga shoguns. Today the building is also known as Rokuon-ji.

Kinkaku-ji houses several important Buddhist relics and is a sacred place for the Rinzai sect of Japanese Buddhism. Each floor of the temple conveys a different architectural style. The first floor is in the Shinden style, the second floor in the Bukke style and the third floor in the Chinese Zen style. Thus became one of the most photogenic temples in all of Kyoto.

The temple was once the retirement villa of the shogun Ashikaga Yoshimitsu. After his death in 1408 he wanted to give the building to the Rinzai sect as a Zen temple. The grounds of the Kinkaku-ji Temple used to consist of several other buildings, but unfortunately burned down in the fires and destruction during the Onin War in the 1400s. The building you see today was also rebuilt in 1955.

Ryoanji Temple is home to Japan’s most famous Zen stone garden and one of Kyoto’s most iconic scenes. Believed to be built back in the Muromachi period (14th - 16th century), the origin and designer of the garden is still unknown to this day. The stones in the garden are intentionally placed so that one cannot view all 15 stones from any one angle. The meticulous design of this karesansui (Japanese rock garden) leads many to credit the celebrated artist, Soami, as the garden’s creator—albeit unproven. The 248-square meter garden bears little trace of greenery, and is instead immaculately lined with raked white gravel. The seemingly random placement of the stones adds to the mystique of Ryoan-ji, its abstract layout leaving visitors questioning the meaning and purpose of the garden. While the garden remains a mystery, the history of Ryoanji Temple is well documented. The temple buildings were originally a Heian Period villa, and were converted into a Zen temple in 1450. Now, Ryoanji is part of the Myoshin-ji school in the Rinzai sect of Zen Buddhism. In 1994, Ryoanji’s immaculate zen stone garden was recognised as a UNESCO World Heritage Site, and is also designated as a Historic Monument of Ancient Kyoto.

Ninna-ji Temple was founded in 888 and is a Buddhist temple in northeast Kyoto that is closely associated with the imperial family of Japan. It is the main temple of the Omuro school of the Shingon sect of Japanese Buddhism. There are many Omuro School temples throughout Japan and many priests from these temples come to Ninna-ji to attend Buddhist services and to study and train in the main temple of their sect. Ninna-ji Temple is known not only for the building itself, but also for its prime location as a viewpoint for the late cherry blossom. He also has a beautiful Japanese garden from which you can see the famous five-story pagoda. Behind Ninna-ji Temple is the Omuro Pilgrimage, a shorter version of the Shikoku pilgrimage. This route can be covered in about two hours on foot, but is believed to have the same meaning as the Shikoku pilgrimage.