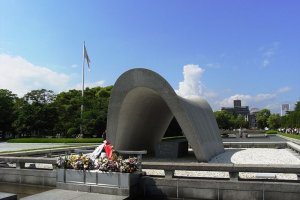 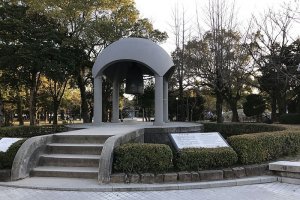 Today, the Hiroshima Peace Memorial Park encompasses 30 acres and is home to numerous memorial statues and a world-class museum. Arguably the highlight of the park is the Peace Memorial Museum, which underwent a major renovation between 2017—2019. The museum focuses on the events of August 6th, with personal images and paraphernalia from the aftermath of the bomb.

On the north end of the park, the Atomic Bomb Dome - also known as the Gembaku Dome - is a skeletal reminder of the horror of that historic day. At 8:15am, the bomb detonated in the air directly over this structure, incinerating everything in the vicinity but leaving the building's framework. Today, the A-Bomb Dome serves as a visceral reminder of that fateful day.

The Children's Peace Monument was built to commemorate Sadako Sasaki and the thousands of child victims from the atomic bombing of Hiroshima. Sadako Sasaki was a young girl who was exposed to radiation from the atomic bomb blast, dying ten years later after a long battle with leukemia. Before she passed away, Sadako had a vision to create one thousand cranes-which she achieved-echoing the Japanese tradition that granted one wish upon doing so. Sadako's wish was for a world without nuclear weapons, and the paper cranes seen here serve as a reminder of this.

The Memorial Cenotaph is otherwise officially known as the 'Memorial Monument for Hiroshima, City of Peace'. Designed by Pritzker Prize winning architect, Kenzo Tange, the cenotaph's shape resembles an ancient clay house that helps shelter the souls of the victims from rain. The stone base houses a registry of the names of over 300,000 people who lost their lives during and after the bombing.

The Peace Bell was created with the hope to abolish nuclear weapons and achieve world peace. Created by bell-caster Masahiko Katori (considered a living National Treasure), the bell is embossed with a singular, unified world map without borders - symbolising an interconnected globe at peace. The surrounding pond contains lotus flowers that come to bloom around early August. Visitors are encouraged to ring the bell as they pray for world peace.

First lit in 1964 in hope of a world without nuclear weapons, the flame continues to burn until they are abolished around the world. The pedestal. that cradles the flame evokes the image of two hands joined at the base, palms facing the sky.

Erected in 1977, this statue depicts a child in its mother's arms who blows a trumpet of peace. A crescent moon completes the sculpture.

Completed in 1955, this memorial mound mourns the ashes of the deceased that are unclaimed - either because their names were unknown or their families/relatives died. The vault lies beneath containing the ashes of some 70,000 victims.

Made of 3 iron pullars and supporting a spherical clock, this 20m-tower was completed in 1967. With its daily chime at 8:15am serving as an apt reminder, the clock calls out for world peace and represents a crossroad for humanity.

A monument dedicated to the Korean victims of the atomic bombing. To make up for a shortage of laborers during the war years, Japan had forcibly imported a number of Koreans to work in factories and camps. Several thousand Koreans were in Hiroshima on the morning the atomic bomb was dropped.

Why not review more places in Хиросима?

The Atomic Bomb Dome, or Gembaku Dome, was once the Hiroshima Prefectural Industrial Promotion Hall. On August 6th, 1945, the world’s first atomic bomb..

Okonomi-mura is a Hiroshima-style okonomiyaki food theme park located at 5-13 Shintenchi in Naka-ku, Hiroshima, Hiroshima Prefecture, Japan. It is n..

Hiroshima Castle (広島城), also known as the Carp Castle, was originally built in 1589. The castle was destroyed by the atomic bomb in 1945 with the..

Shukkei-en is a historic Japanese garden in the city of Hiroshima, Japan. The Hiroshima Prefectural Art Museum is located adjacent to the garden. [Wikipedia]..