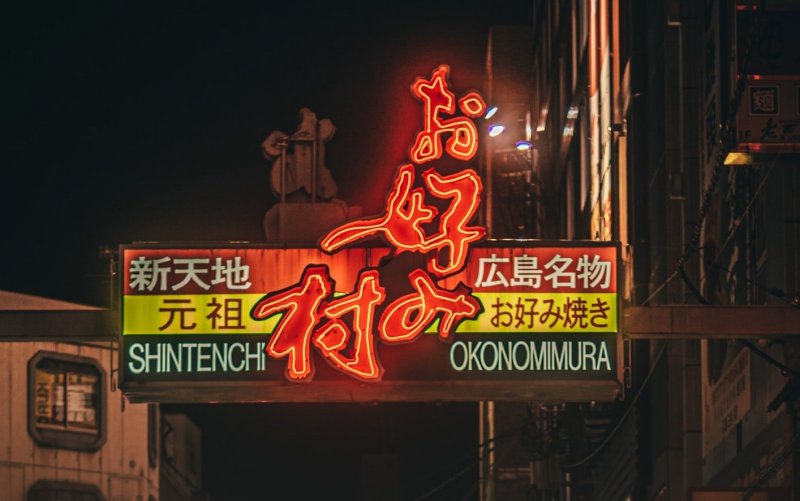 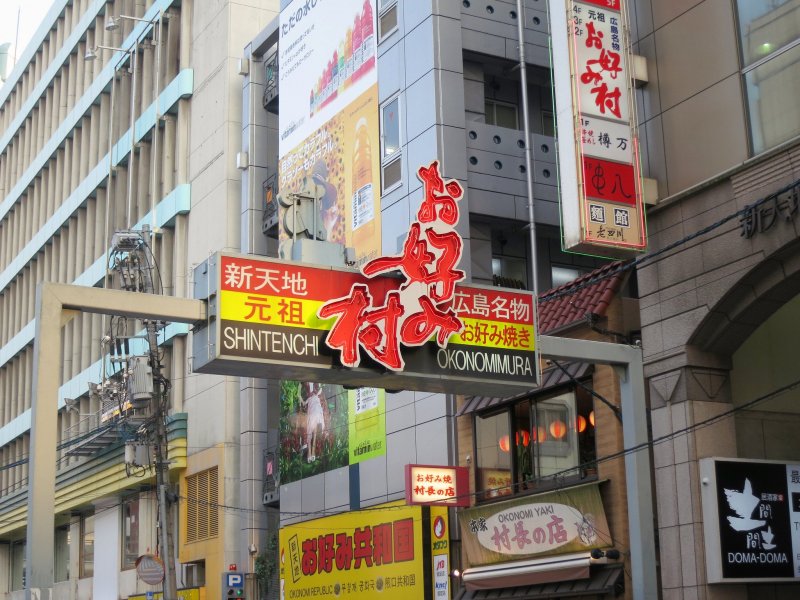 Okonomimura is a Hiroshima-style okonomiyaki theme park located in Shintenchi, Naka-ku, Hiroshima, near the east end of the Hondori shopping street. It has 24 okonomiyaki restaurants, each with a slightly different style and one different selection of ingredients.

Okonomiyaki began in the pre-war period as a dish called "Issen Yoshoku" ("" Western food for a dime ""), which was very popular with common people. It consisted of a flour paste cooked with onions, dried shrimp, and spices. After the war, other ingredients such as cabbage, eggs, seafood, buckwheat and wheat noodles were used to improve the diet in these tough times. This is how today's Hiroshima-style okonomiyaki came about.

Hondori (本通) is one of the main shopping districts in Hiroshima's bustling downtown area. This pedestrian arcade street (shotengai) is a shopper's paradise, lined with everything from clothing stores, trendy boutiques, cafes and restaurants, through to karaoke bars, gaming arcades, purikura parlours and anime shops. When it comes to shopping in Hiroshima, Hondori is a popular choice. As a covered walkway, shoppers can also feel protected from the elements allowing plenty of time to find the perfect souvenir come rain or shine. Hondori is perfectly placed in the heart of Hiroshima's downtown and an easy, worthwhile stop on any Hiroshima itinerary. The street stretches for over half a kilometer from Peace Park in the west (near Sunmall), to the PARCO department store to the east (in the direction of Nagarekawa). It's easy to explore Hondori in combination with other sightseeing spots. For food, try local brands like Andersen's Bakery, the famous Okonomimura just off the eastern side, the well-known The Shack Bar and Grill, (moved from its original Chuodori location) or just keep things simple at the Starbucks on the eastern side — a popular meeting spot for locals, alongside the nearby Alice Garden. When shopping in Hiroshima, you can come across some interesting local chains, like Fresta, Wants and Edion (formerly DeoDeo)—not to mention some interesting heritage. Hiroshima is not just the home for Mazda, but also where it began for another global brand: Uniqlo. Just a few blocks away from Hondori towards Fukuromachi you can stumble across the building where the original branch for 'Unique Clothing Warehouse' (as it was originally known) started back in 1984. It's now occupied by a different business (Chacott), but easy to find being right next door to Hiroshima's branch of Paul Smith. Hondori is reliably busy at all times of the day, with many shops and cafes open until late. For a rainy day excursion, you can continue your shopping journey underground too — the entrance to the Kamiyacho Shareo underground mall can be located at the Hondori Streetcar stop.

"Carried to Hiroshima from Tinian Island by the Enola Gay, a U.S. Army B-29 bomber, the first atomic bomb used in the history of humankind, exploded approximately 580 meters above this spot. The city below was hit by heat rays of approximately 3,000 to 4,000°C, along with a blast wind and radiation. Most people in the area lost their lives instantly. The time was 8:15 a.m., August 6, 1945." This plaque on a downtown Hiroshima sidestreet marks the hypocenter of the Hiroshima atomic bombing, with the detonation of 'Little Boy' taking place 600 ft above this spot. Expect to see flowers or paper cranes left in memory at various times of the year.