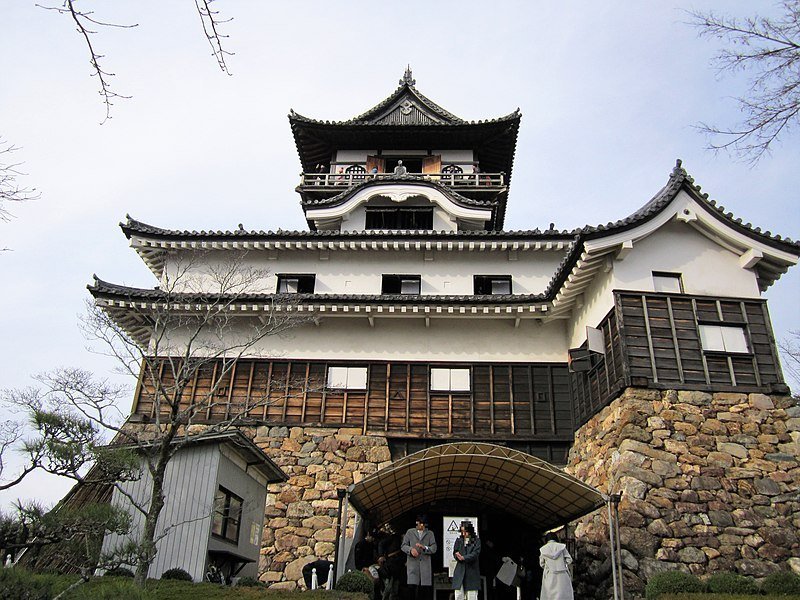 Inuyama Castle is the oldest of twelve originally preserved castles in Japan (ie castles that have survived intact natural disasters and wars since the end of the feudal era in 1867). It is also the smallest of the five castles whose main towers are designated as a national treasure. The other four castles are in Himeji, Matsumoto, Hikone and Matsue.

It was built in 1537 and stands on top of a small hill next to the Kiso River. The inside is very well preserved and gives an insight into life back then. Via the steep stairs, visitors can climb four floors to get an impressive panoramic view from above. You can also discover a lookout point that was used to spot enemies as soon as they approached.

The castle can be reached from Inuyamayuen or Inuyama station. Inuyamaen station is closer to the castle but you also can get off at Inuyama station and walk through a long street lined with shops, souvenir shops, restaurants, mochi and green tea shops, one of the snacks famous here in Inuyama.

Meiji-mura (Meiji Village) in Inuyama, Aichi Prefecture, is an open-air museum and theme park. History and architecture lovers will be pleased by the preserved atmosphere of the Meiji (1867-1912), Taisho (1912-1926), and early Showa (1926-1989) periods. Visit a Japan of the past, when Japanese fashion and culture was beginning to mingle with its international counterparts. In Meiji-mura, you can see how this combination of Euro-Japanese architecture and fashion brought a new impression and feeling to the Japan of old. You’ll even be able to see Frank Lloyd Wright’s landmark Imperial Hotel; originally constructed in Tokyo from 1923 to 1967, the hotel was reconstructed in Meiji-mura and makes for the impressive centerpiece of the grounds. Scattered around the one-million-square-meter property are a total of sixty-seven Meiji-era reconstructed original buildings—eleven of them are even recognized national treasures. While you’re at Meiji-mura, you can also rent a kimono and experience the Meiji period as though you lived it. Ride streetcars, send original postcards from the historical post office, and experience Kabuki theater shows.

Tagata Shrine, located in Komaki City, Aichi Prefecture, is famous for its fertility festival every March 15. Each year, a newly carved wooden phallus 2-meters long is carried by men said to be an unlucky age. This festival is said to show the bond between heaven (the penis) and earth (the ground the men tread upon) and bring a bountiful harvest—not to mention fertility to festival-goers. This festival has become more and more popular with foreigners in recent years for its unusual shock factor. Tagata Shrine itself is a relatively small shrine in Komaki, which is also a quaint town north of Nagoya. Built over 1500 years ago, shrine visitors won’t be disappointed if they visit outside of festival times. There are heaps of manmade and natural rock formations all in the shape—or suggestive—of phalluses. In the past, some of the shrines’ collection would be lent out to couples wishing for children and then returned to the shrine once the lucky couple had their wish granted.