Taste the different flavors of Chiba

Sake is a seemingly simple drink made of water, rice, and koji. For over 2,000 years, sake has held an important role in Japanese culture. The knowledge and brewing techniques have spread across Japan. Having some knowledge about a key part of Japan’s culture can add to the understanding of Japanese history and social environment. To help with my understanding of sake, JTB, a group offering Japan tours for foreigners, organized a trip to some of Chiba's oldest sake breweries.

Our brewery tour took place in Sawara, now part of Katori City. Once lucrative from their sake trading during the Edo period, Sawara now survives on tourism around the Ono River. The Ono River leads to the Tone River, creating the key for Sawara's river-based commerce to Edo. Because of the convenience to Edo, sixty-five breweries were established in Sawara to create and trade sake, and a "greater than Edo" attitude filled the city. Unfortunately for Sawara's merchants and brewers, the establishment of the railroad caused a stand-still to trade along the Tone. Now, only three breweries remain in modern day Katori.

Our boat took us to Baba Honten, where a tall red-brick chimney broke the sky. The brick chimney seemed out of place in comparison to the Edo buildings made of clay and cedar. The chimney symbolizes Sawara's prosperity at the height of the Edo Period. With the emergence of international trade in Japan, the Baba Family bought red bricks from England. Since that time, the brewery has been persevered, much like Sawara.

Baba's greeted us at ten in the morning with a cup of sake. The drink was a smooth wake-up call with a hint of banana. This fruity flavor comes from the secret ingredient, koji. Unlike wine, which is naturally fermented by squeezing the grapes and adding yeast, koji is mold grown on rice that converts the rice's starch into sugar. With this process, different flavors are produced, ranging from fruity to full-bodied.

Baba founded the brewery in the 1700's, and today the fifteenth generation runs the company. After exploring the original Edo-era architecture, our group stopped to taste Baba's mirin, or rice vinegar. Their mirin uniquely tasted like syrup, and no one left without their own bottle.

Down the street stands Tokun Shuzo, whose sake differs from Baba's sweet flavor. We tasted a special sake called Kano which is not sold in stores, but only at Tokun's. It is a dai-ginjoshu that is made from grains of rice that have been polished to 50% of the original grain. Normally, sake is made from rice that has been polished to 60% or 70% of the grain. The taste of the dai-ginjoshu is a pure, crisp taste. Next was a bottle of golden-colored sake, a twenty-year matured koshu. The color and taste is similar to whiskey, and is an acquired taste.

Outside of Sawara is Nabedana Brewery in Katori City. Baba and Tokun preserved and facilitated the original Edo architecture as their brewing area, but Nabedana left their Edo-buildings as storage. Although larger and more modern than the breweries found near Ono River, the seventeenth generation of the founding family continues to brew. Established in 1689, Nabedana is the third oldest brewery in Chiba, and never compromises the taste of their sake.

Nabedana was extremely informative on the process of koji. We were able to actually taste the koji as it was in the process of cultivating mold, with the rice slightly stale but sweet. Despite Nabedana's modernization, traditional methods are used to brew. The koji is cultivated by hand in a warm room, and once the sake is fermented, it is hand dripped to separate the liquid from the rice leavings. We tried freshly hand-dripped sake, genshu. This sake was strong as it had not been diluted with water yet. The taste is very deep and rich, and my personal favorite. Nabedana seems to mix the best of modern business with traditional brewing.

Although our tour incorporated many breweries, the constant differences in environment, production, and taste kept the group entertained throughout the weekend. With a sad history of losing their stance as a cultural-hub, one hopes that tourism will breathe life back into the Edo city of Sawara. 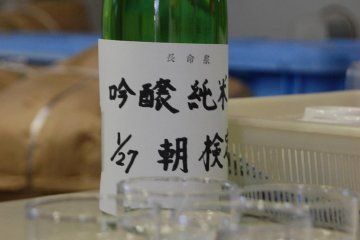 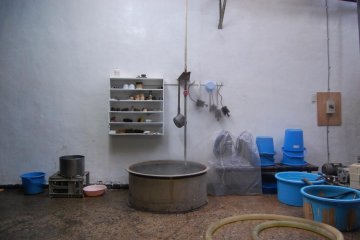 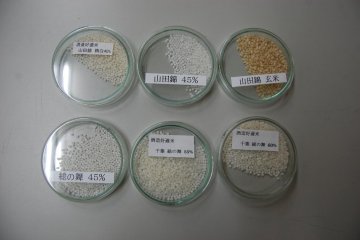 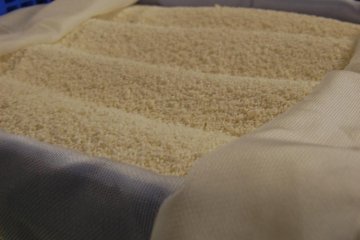 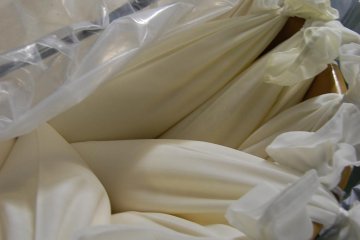 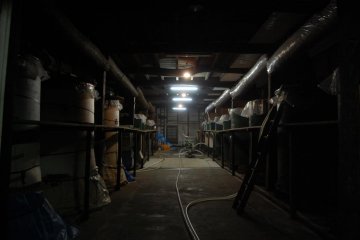