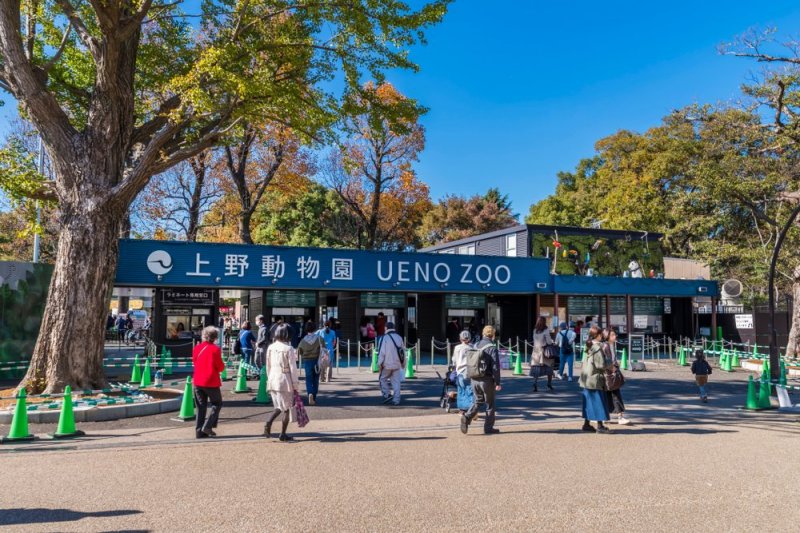 Ueno Zoo is the oldest zoo in Japan and one of Ueno's greatest attractions. The zoo began as a collection of wild animals affiliated with the National Museum of Natural History and first opened as a public zoo on March 20, 1882. The zoo has expanded significantly since then and is now home to over 3,000 animals and 400 different species. The attraction of Ueno Zoo, however, is the pandas, also because they have successfully reproduced. Ueno Zoo is actively committed to the conservation of wild animals.

The zoo is divided into two sections, a west and an east park, each with different animal species. The two areas are connected by a bridge. To the east are the pandas, Asian elephants, large numbers of bears and larger mammals like gorillas, tigers and lions. In the west area there is a petting zoo and a reptile and amphibious house. This area also focuses on animals from Africa: rhinos, hippos, giraffes and zebras.

A five-story pagoda and a tea house from the 17th century round off the visit to the zoo and give this historic zoo a typically Japanese touch.

Enter the world of Moomin, the Finnish fairy-tale comic characters, in the exclusive Moomin Café in Tokyo Skytree Town. This permanent Moomin Café is specially designed for Moomin fans and offers dishes, desserts, drinks and decorations on the Moomin theme. Whether you are alone or eat in company, a plush Moomin figure will keep you company at the table. The figures of the Moomins are hippopotamus-like troll creatures and were invented by the writer Tove Jansson. They love in the idyllic Moomin Valley somewhere in Finland. The Moomin characters are very popular worldwide and their adventures have been translated into more than 30 languages. There is another highlight for real Moomin fans: The "Moominvalley Park" theme park was opened in March 2019 about 40 kilometers northwest of Tokyo in Saitama prefecture and offers further insights into the world of trolls.

The National Museum of Western Art is the premier public art gallery in Japan specializing in art from the Western tradition. The museum is in the museum and zoo complex in Ueno Park in Taito, central Tokyo. It received 1,162,345 visitors in 2016. Wikipedia

Tokyo Bunka Kaikan is a renowned concert hall located in Ueno Park, the green heart of Taito Ward. The hall opened in 1961 as a hub for arts and culture and has since played host to numerous operas, ballets, and classical concerts by both Japanese and international artists. The building itself is a feat of modern architecture and was designed by architect, Kunio Maekawa. The main hall, which features opera, ballet, and orchestral performances, is an impressive five stories high and contains 2,303 seats. Its modern interior is visually stunning, and its acoustics are world-renowned. The smaller recital hall, located on the second floor, has 649 seats and hosts almost daily chamber music concerts and recitals. In addition to its performance halls, Tokyo Bunka Kaikan is also home to an extensive music library, meeting rooms, rehearsal rooms, a restaurant, a cafe, a gift shop, and a Japanese goods and accessories store. In theme with its mission to promote the arts, the facility holds multiple workshops, competitions, and professional development programs to encourage and facilitate artistic learning.

National Museum of Nature and Science