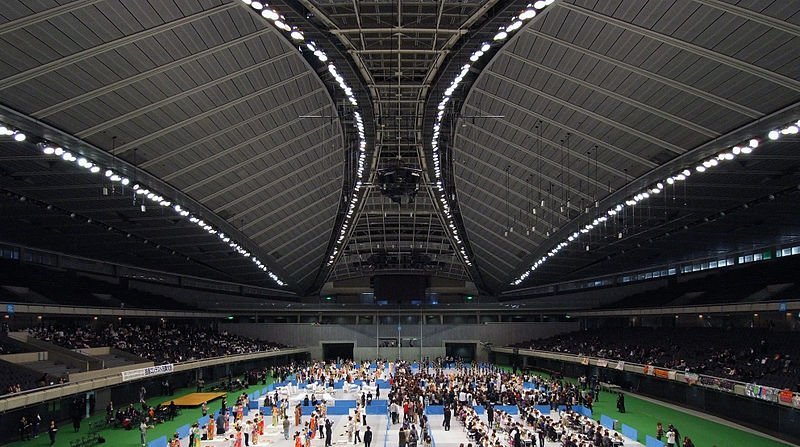 The venue for the gymnastics and water polo competitions during the 1964 Tokyo Olympics, the Tokyo Metropolitan Gymnasium continues to be an important sporting facility for the city today. It will host the table tennis competition during the 2020 Olympic and Paralympic Games.

Several facilities are currently closed due to preparations for the 2020 Tokyo Olympic and Paralympic Games – please confirm on the official site before visiting.

The site has an interesting history. It was once owned by Iemasa Tokugawa (1884 to 1963), a politician and diplomat, and the 17th hereditary head of the famous Tokugawa shogunal family. The Tokyo government purchased the land and buildings in 1943, it was then used by US military officers for some years following the Second World War. After the site passed back into the hands of the Tokyo government in 1952, all the former wooden buildings were torn down and a modern concrete gymnasium was finished in 1956.

The facility underwent a complete renovation between 1986 and 1990 and the city has continued to make additions and improvements over the years. The main arena can seat up to 10,000 people. The gymnasium has hosted both national and international sporting competitions in diverse sports, such as volleyball, wrestling, and figure skating. Since 2000, the arena has also been used for concerts and Katy Perry performed there in 2015.

A new kind of system for managing the gymnasium was instigated by the Tokyo government in 2006, with Tokyo Sport Benefits Corporation being the current designated manager. Some of the facilities, including the swimming pool, training room, and athletic fields are usually open for use by the public. However, please note these are currently closed due to preparations for the 2020 Tokyo Olympic and Paralympic Games.

There is a restaurant right in front of the Meguro station where you can eat your own fish. All kinds of Japanese dishes and fresh seafood are also served. In some pools inside the restaurant you can catch your own fish with a fishing rod and net and then let the staff know which table it should be brought to. You can watch the fish being prepared in the kitchen and let you know in advance how the fish should be prepared: whether as sashimi, grilled, boiled, deep-fried (with tempura) or as sushi. If you don't manage to catch your own fish, then you can of course order a fish from the menu. However, the price is much lower if you want to have your own catch cooked .

The National Stadium was used as the main stadium for the 1964 Tokyo Olympics and was then converted into a brand new stadium for the next Tokyo Olympics and Paralympic Games. It is located in Kasumigaoka, Shinjuku District, where the Olympic opening and closing ceremonies will be held and Paralympic Games, as well as athletics and football matches, after which the stadium will be used for sporting and cultural events.The stadium has a capacity of 68,089 seats. There is a park landscape with lots of trees around the stadium. The open facade is fitted with greenery all around and is intended to promote ventilation of the interior of the stadium. During the construction, attention was paid to the use of natural materials such as wood. This, which comes from 47 prefectures in the country, was also used for the roof construction, the facade, as well as for the changing rooms and boxes.

The National Noh Theater is located in Shibuya City, a mere three minutes walk from Shinjuku Gyoen National Garden. Opened in 1983, the facility is run by the Japan Arts Council and hosts various noh, kyogen, kabuki, and bunraku performances throughout the year. The nearly 600-seat theater is composed primarily of wood and features an elegant 400-year-old cypress stage with a pine tree painted on the back, which is customary for noh stages. The facility also includes a rehearsal stage, lecture room, and reference library, as well as an exhibition area called the Traditional Performing Arts Information Centre. This center is located on the first floor and displays costumes, props, and ukiyo-e woodblock prints. It is free to enter and is open from 10:00–18:00.  You can purchase tickets online, reserve them by phone, or buy them at the theater. Noh is a traditional form of Japanese theater that uses music, dance, gestures, masks, and elaborate costumes to tell a story that is often related to legends and history. Kyogen, on the other hand, is a comedic performance that relies on witty dialogue to make the audience laugh. The combination of the two, in which kyogen is performed during breaks in the noh performance, is called nogaku and is recognized as an UNESCO Intangible Cultural Property. Kabuki is another form of traditional theater that utilizes song and dance for storytelling, and bunraku is a type of Japanese puppet theater.

This huge park in the heart of Tokyo is known for its numerous sports facilities. It also offers many other attractions for visitors of all ages. The most famous place is the Jingu Stadium, the oldest baseball park in Tokyo. It was opened in 1926 and is the home of Tokyo Yakult Swallows. Baseball is one of the most popular sports in Japan and Jingu Stadium is a great place to see the excitement of Japanese fans. An ice rink, tennis courts and a tee are some of the other facilities on offer. There is also a Meiji-era picture gallery for history buffs. The complex is located east of the revered Meiji Shrine and is only a few minutes' walk from Aoyama-itchome Station.