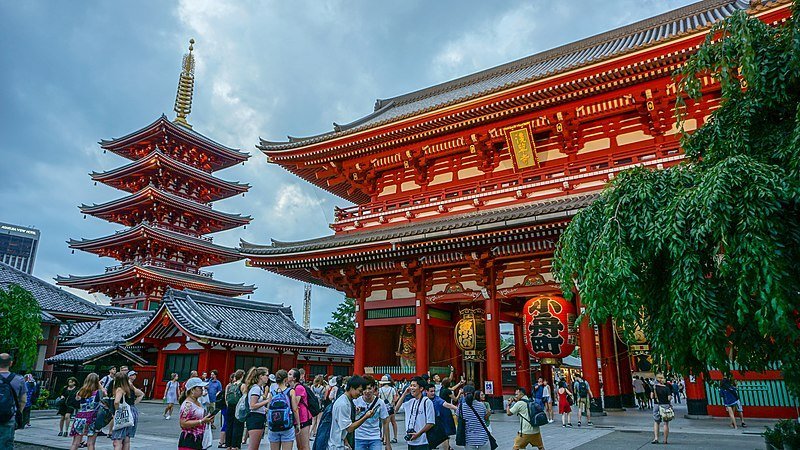 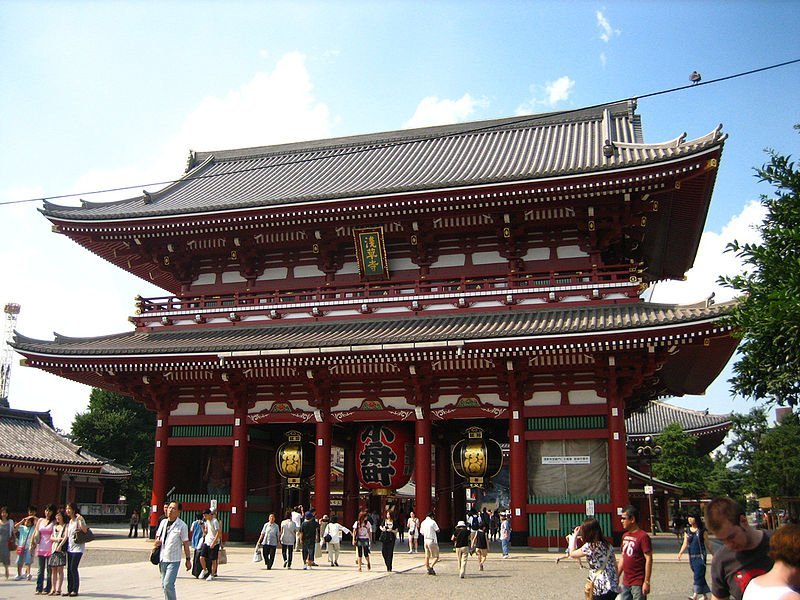 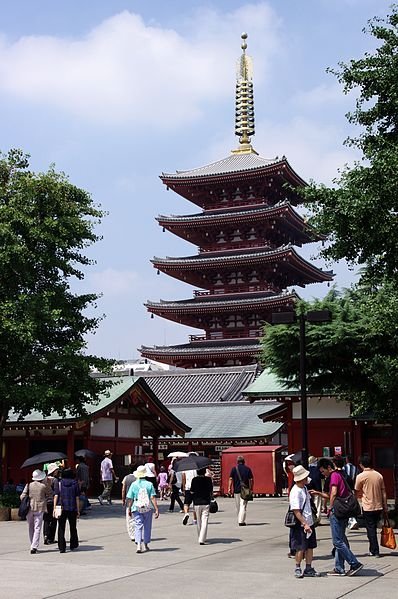 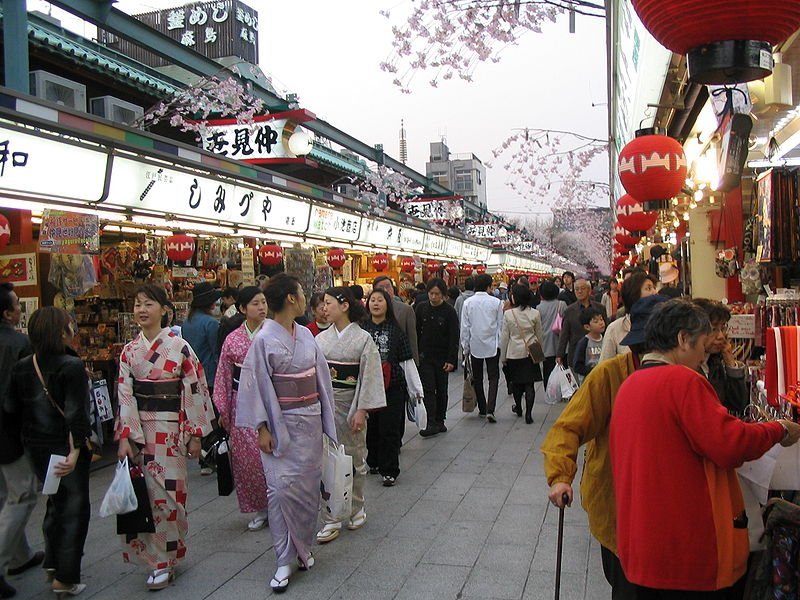 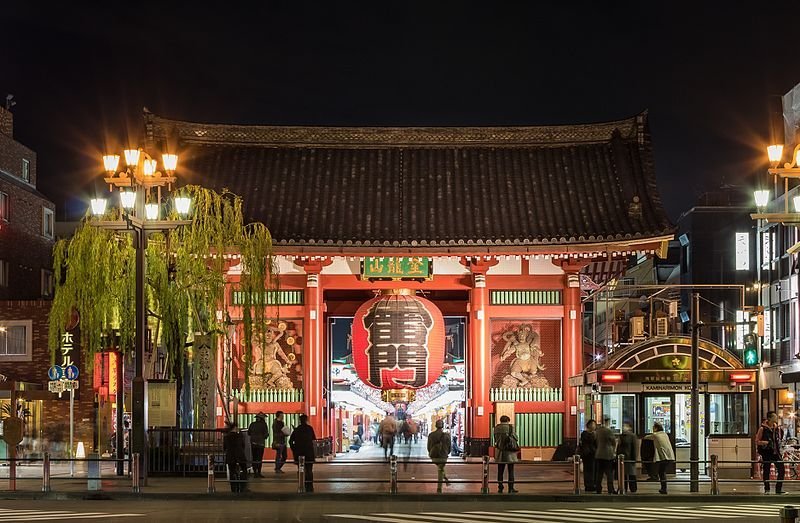 Senso-ji Temple (浅草寺, Sensōji) is a popular spot for omikuji, or fortunes. These auspicious sheets are offered in a multitude of languages, enticing both Japanese and foreigners alike to see how their luck plays out. If the number you draw is less than lucky, don’t worry – simply tie up the offending fortune on the nearby wires and allow your bad karma to be spirited away.

The temple also shares its grounds with the Asakusa Shrine, dedicated to the three men credited with the temple’s founding. Considered one of the oldest original buildings in Tokyo, the shrine plays host to the exuberant Sanja Matsuri every May. Another popular building (and photo spot) is the five-story pagoda

A number of other festivals take place at Senso-ji throughout the year. The Kinryu-no-mai (Dragon Dance) can be enjoyed on March 18th and October 18th, when a large golden dragon on poles is paraded through the streets. Visitors on April 14th can witness the Sagi-no-mai (White Heron Dance), which features a parade of participants in both Heian-era outfits and heron costumes. In late autumn, the temple’s atmosphere grows even more exuberant during its end of the year rake fairs. Buyers come to purchase one of the many colorfully adorned tools in the hopes of raking in good fortune in the coming year.

It is arguably one of the most popular tourist destinations in the city, Senso-ji Temple – also known as Asakusa Kannon – can trace its roots back to the early 600s. In 628, two fishermen on the nearby Sumida River repeatedly brought up a golden statue of the Buddhist goddess of mercy along with their usual catch. Finally deciding not to throw the statue back to the depths of the river once more, they instead brought it to their village headman, who convinced them to build a temple in its honor. Senso-ji Temple was finished in the year 645 and quickly became a pilgrimage site.

Its popularity endured over the centuries and even continues in the present day, with most visitors making this one of their first stops in Tokyo. The road leading up to the temple, known as the Nakamise-dori or “street of inner shops”, peddles everything from lacquered chopsticks and ukiyo-e prints to cheap keychains and colorful trinkets. Cake-like ningyoyaki¸sweet treats that are served hot off the iron grill, are a popular purchase, as are warming cups of amazake in the winter months.

Enter the world of Moomin, the Finnish fairy-tale comic characters, in the exclusive Moomin Café in Tokyo Skytree Town. This permanent Moomin Café is specially designed for Moomin fans and offers dishes, desserts, drinks and decorations on the Moomin theme. Whether you are alone or eat in company, a plush Moomin figure will keep you company at the table. The figures of the Moomins are hippopotamus-like troll creatures and were invented by the writer Tove Jansson. They love in the idyllic Moomin Valley somewhere in Finland. The Moomin characters are very popular worldwide and their adventures have been translated into more than 30 languages. There is another highlight for real Moomin fans: The "Moominvalley Park" theme park was opened in March 2019 about 40 kilometers northwest of Tokyo in Saitama prefecture and offers further insights into the world of trolls.

Tokyo Solamachi is a shopping, dining and entertainment complex at the foot of the famous Tokyo Skytree. It has more than 300 shops and restaurants and is well worth a visit even without the tallest tower in Japan. There are original Japanese souvenir shops, an official Tokyo Skytree shop, a large food market and food area, as well as many other restaurants and shops that invite you to extensive shopping. Tokyo Solamachi is also home to the Sumida Aquarium, a planetarium and many small green areas and terraces. The Postal Museum opened in March 2014 on the ninth floor. It has an extensive collection of postage stamps from around the world, as well as interactive exhibits and exhibits that show the history of postal services in Japan.

With a height of 634 meters, the Tokyo Skytree is Japan's tallest structure and a symbol of Tokyo. It is located in the northeastern part of Tokyo. The height of the tower is an allusion to both its current location and the history of the area: 634 is also a reading of the Japanese characters for "Musashi," the old name of the province in which the tower stands today. The Tokyo Skytree has two viewing platforms that offer spectacular views over Tokyo. The two closed decks are at heights of 350 and 450 meters respectively, making them the highest observation decks in Japan. The Tembo deck, the lower of the two decks, is 350 meters high and extends over three levels with great views from all floors. The higher Tembo Gallery (450 meters) consists of a sloping spiral-shaped ramp that increases in height as you go around the tower. You'll find many attractions inside the tower's observation decks, such as restaurants with skyline views and photo spots manned by staff. Attached to Skytree is an expansive shopping and sightseeing area called Solamachi. Filled with specialty shops ranging from salts to chopsticks, toys to t-shirts.