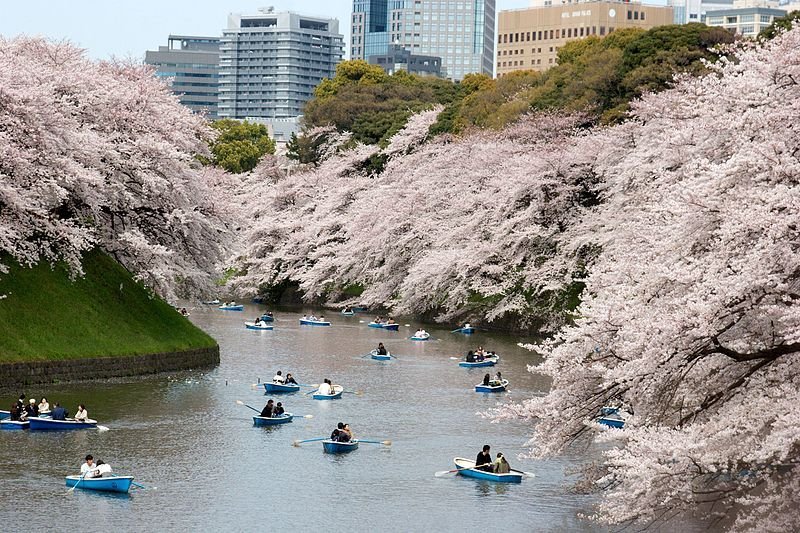 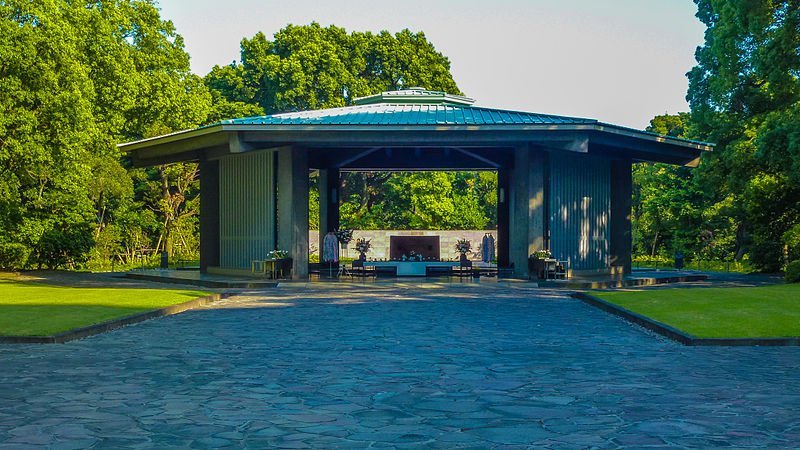 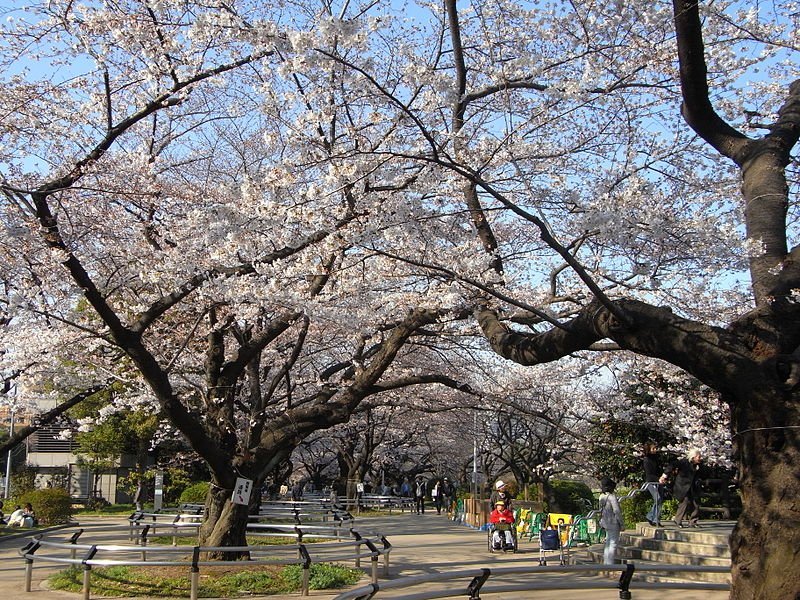 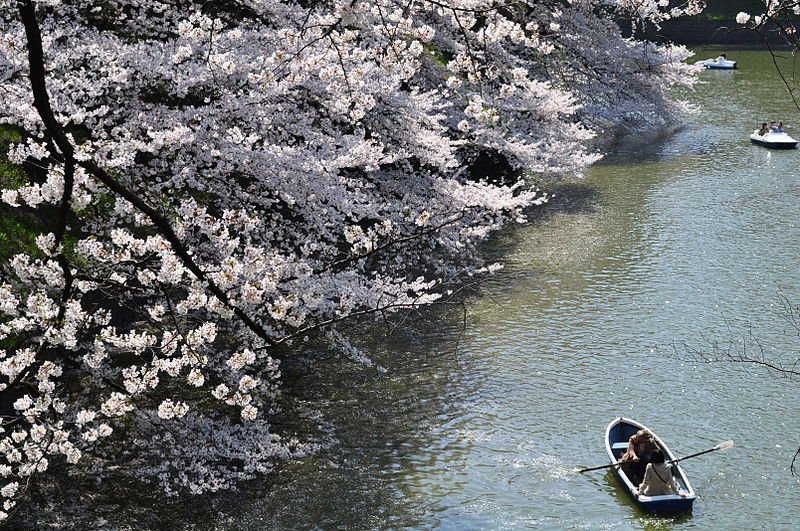 The Chidorigafuchi Trench is one of the best places in Tokyo to see the cherry blossoms in spring, from late March to early April. This 700-meter walk next to the Imperial Palace moat offers beautiful scenery and great opportunities for discovery.

During the popular cherry blossom season, the paths along the moat are colored pink by hundreds of cherry trees. The trees are also lit at night during the Chiyoda Sakura Cherry Blossom Festival. A little later in the year the surface of the water is almost completely covered by falling petals. Many couples rent boats and take a romantic excursion through this pink wonderland.

Chidorigafuchi is directly adjacent to Exit 2 at Kudanshita Station.

The National Museum of Modern Art, Tokyo, (abbreviated as MOMAT) is Japan’s first national art museum. The museum was initially founded in 1952 in Chuo Ward, before it was relocated in 1969 to its larger present-day location in Chiyoda Ward beside the Imperial Palace. The sleek facility was designed by architect Yoshio Taniguchi and has undergone multiple renovations and expansions to meet its ever-growing collection. The main building itself extends 4,500 square meters, making it one of Japan’s largest art museums. Aside from the main building, MOMAT also includes the Crafts Gallery, which opened in 1977. This gallery is located in the former Imperial Guards headquarters and is a beautiful example of western-style brick architecture from the Meiji period.  The museum has an impressive collection of about 13,000 Japanese- and Western-style pieces from the early 20th century to present day and displays about 200 works at a time. The main hall generally features paintings, prints, watercolors, drawings, sculptures, and photographs, while the Crafts Gallery displays ceramics, glasswork, lacquerware, woodwork, bamboo work, graphic design, and more. MOMAT also includes a museum shop and a French-and-Italian-fusion restaurant.

Yasukuni Shrine (Yasukuni Jinja), located in Chiyoda City, Tokyo, was established in 1869 by Emperor Meiji to commemorate and honor those who gave their lives for their country during war time. Today, the shrine is dedicated to nearly 2.5 million souls from a number of conflicts, including the Boshin War, the Seinan War, World War I, the Manchurian Incident, the China Incident, and World War II. Men, women, and children who supported Japan in roles such as, but not limited to, soldiers, factory workers, and civil service workers are worshipped equally regardless of rank, social status, or gender. The shrine solemnly recognizes the names, origins, birth dates, and places of death of these individuals by listing their information on-site. The shrine stands as a solemn reminder of the effects of war with an atmosphere of both respect and tragedy. Though in recent years, Yasukuni has become one of Japan’s most controversial shrines. History of Yasukuni Shrine Emperor Meiji founded Yasukuni Jinja in 1869 during the second year of the Meiji Restoration. During this time, Japan was going through political reform, which sparked an internal conflict known as the Boshin War, where people in favor of military rule fought individuals who aimed to return power to the Imperial court. After this significant event, Emperor Meiji ordered the construction of Shokonsha Shrine, which he later renamed Yasukuni Jinja in 1879, to honor those who gave their lives for this historic change. Emperor Meiji founded Yasukuni to stand as a symbol of the ultimate sacrifices people made to bring peace to Japan. Today, the shrine is recognized as an Imperial Shrine of Special Status. Controversy In recent years, Yasukuni Jinja has seen some political controversy as fourteen convicted class A war criminals from WWII are enshrined among the deified souls. This has put many of Japan's leading ministers under scrutiny for visiting the shrine, related to the principle of separation of church and state. Today Five million people visit Yasukuni Jinja every year to pay their respects to the enshrined souls. The shrine is free to visit and is open year-round from 6:00 to 18:00 (17:00 from November to February). Yasukuni’s entrance is marked by the dominating Daiichi Torii, which is the first shrine gate and one of the tallest torii’s in Japan, standing at 22 meters tall. As visitors pass the threshold onto the sacred grounds, they are enveloped in an atmosphere of solemn serenity. The traditional, yet not overly-flamboyant architecture coupled with the surrounding nature creates a peaceful environment that honors the enshrined souls. Directly past the torii is a bronze statue of Omura Masujiro, the first Minister of War after the Meiji Restoration. Continuing forward, guests will pass through a second torii, named Daini and then Shinmon, a pagoda-style main gate. The main area of the shrine opens up to a courtyard filled with cherry blossoms, which leads to Haiden Main Hall and Yushukan Museum to the right. Yushukan Museum is an impactful building that tells the stories of the countless enshrined souls. Though the museum has also come under scrutiny due to its conservative and biased retelling of wartime events. The museum has an 800 JPY admission fee and is open from 9:00 to 16:30.  For springtime enthusiasts, Yasukuni is also a significant spot as it is home to Tokyo’s representative cherry blossom tree, which is used by meteorologists to announce the official start of the cherry blossom season.  Yasukuni Jinja performs daily rituals where it offers food and words of gratitude to the dead, and twice a year, in spring and autumn, it performs major rituals in which offerings by the emperor are consecrated. Members of the imperial family also take part in these rites. The shrine also plays host to numerous Shinto festivals and rituals year-round.

The Imperial Palace is both literally and figuratively a hub of the Japanese capital. Located in central Tokyo, the palace grounds were once home to Edo Castle, the seat of government of the Tokugawa shogunate and the center around which the country is almost three Spun for centuries. When the capital moved from Kyoto to Tokyo in the 1860s, the imperial family traveled with it, and a new residence was built for them on the site of the former castle. Today the palace is still the home of the Japanese imperial family and parts of the site can be visited with a guide.