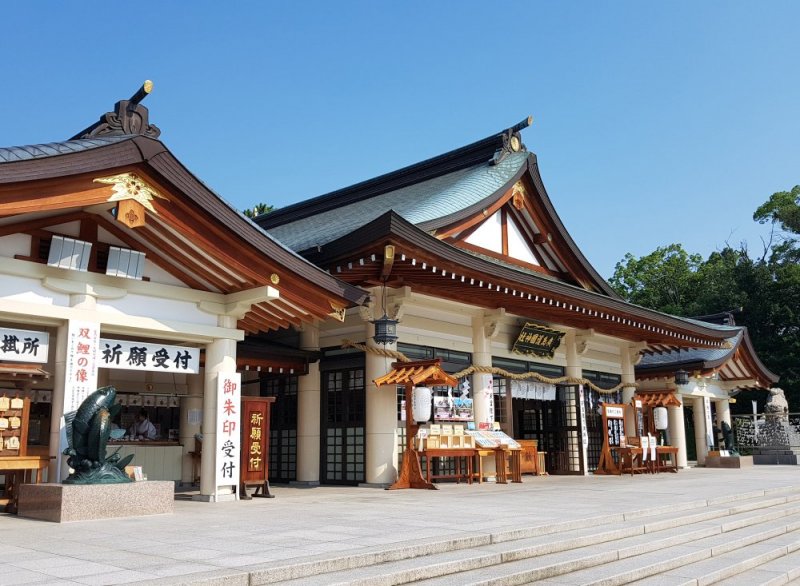 Located on the grounds of Hiroshima Castle, Hiroshima Gokoku Jinja (広島護国神社) is a Japanese Shinto Shrine in central Hiroshima City.

"Gokoku" Shrines are Shinto shrines designated as places of worship for those who have died in war. Like the controversial Yasukuni Shrine in Tokyo, what became Hiroshima's Gokoku Shrine was also originally constructed in 1868 to commemorate the Hiroshima Han victims of the Boshin War. Seventy-eight souls were enshrined in the Futabanosato shrine, named Mikureisha (水草霊社).

Eventually, the total number of souls enshrined there reached 92,700, including the soldiers from the former Aki no kuni (now western Hiroshima Prefecture) who died in Japan's wars up until the start of the Great East Asian War (as World War 2 post Pearl Harbor is known in Japan) and around 10,000 workers and volunteer corps who were stationed in Hiroshima and lost their lives to the A-Bomb.

In 1934 it was dismantled, rebuilt and renamed Kansaishoukonsha (官祭商塊社), and moved to a corner of the west of the military parade ground, where the Hiroshima Municipal Baseball Stadium stood until the end of 2008. In 1939, its name was changed by order of the Interior Ministry to the Hiroshima Gokokujinja. In 1945 it was destroyed by the atomic bomb, and was rebuilt on the current site within the grounds of Hiroshima Castle in 1956 with the aid of donations from the citizens of Hiroshima.

The current main building is even more recent, rebuilt in 1995, when the grand stone slab approach was also added.

Events at the shrine are held throughout the year.

Gokoku Shrine can be found within the main castle grounds of Hiroshima Castle.

By foot: The castle is about 10-15 minutes walk from both Peace Park and Shukkeien Garden. By foot, it can form part of an ideal day itinerary.

Okonomimura is a Hiroshima-style okonomiyaki theme park located in Shintenchi, Naka-ku, Hiroshima, near the east end of the Hondori shopping street. It has 24 okonomiyaki restaurants, each with a slightly different style and one different selection of ingredients. Okonomiyaki began in the pre-war period as a dish called "Issen Yoshoku" ("" Western food for a dime ""), which was very popular with common people. It consisted of a flour paste cooked with onions, dried shrimp, and spices. After the war, other ingredients such as cabbage, eggs, seafood, buckwheat and wheat noodles were used to improve the diet in these tough times. This is how today's Hiroshima-style okonomiyaki came about. [Photo: Victor Lee / CC BY-NC-ND 2.0]

The Atomic Bomb Dome, or Gembaku Dome, was once the Hiroshima Prefectural Industrial Promotion Hall. On August 6th, 1945, the world’s first atomic bomb exploded in the air directly over the building. The Hiroshima Prefectural Industrial Promotional Hall was initially built in 1915. Designed by Czech architect Jan Letzel, the building featured European construction styles and was considered both a picturesque and important site in Hiroshima city. When the atomic bomb exploded directly overhead at 8:15am on August 6th, the resulting nuclear blast killed everyone within the building itself and in the immediate vicinity. The roof was set ablaze and the walls were destroyed but the metal frame of the building was mostly left intact. In the post-war years, the hall became known colloquially as the Atomic Dome. Several renovations have been carried out on the remains over the decades, mostly to counteract severe weathering. In 1996, the dome was registered as a UNESCO World Heritage Site. Today, the A-Bomb Dome sits at the northern end of the Hiroshima Peace Memorial Park, a short walk from the Gembaku Dome tram stop (Gembaku-mae) and the city’s central shopping arcades. In the evening, muted lighting illuminates the dome. It presents a striking scene of sadness and loss but also perseverance and hope.

Shukkei-en is a historic Japanese garden in the city of Hiroshima, Japan. The Hiroshima Prefectural Art Museum is located adjacent to the garden. [Wikipedia]